This rally started in 1972 and is run by the Loch Lomond MCC, my first Antler was in 1975 when I was pillion on a BMW. The final 30 miles, along the Ardnamurchan peninsula, was in those days a narrow unfenced single track road with grass growing in the centre in places. Today the grass is gone but the scenery remains.

Ted Trett has done many Antlers, last year when he had to work until midday on the Friday we rode there on the Pan European in an afternoon. Nearly 400 miles made too easy with improved roads and a modern motorcycle.

There was always the thought of taking my Brough there but… too far for a weekend and as we had no suitable ‘pair’ Ted would have to ride a faster bike slowly. That was not going to happen so it remained just a silly idea.

The idea remained though and Ted wondered if the Tate Brough could be borrowed from the club so we could take two Broughs! This is a bike which was bequeathed to the Brough Club and they allow it to be borrowed by members who have not got a bike on the road. In July it was taken to Germany where it did over 2,800 miles.They are both late SS80s and would be well matched – let’s go for it! It would be good to take them to events which were mainly for modern riders and show that even old bikes could be used.

Ted picked the Tate up (we soon nicknamed it ‘Spud’ after I heard him calling it ‘Tatey’) and rode it home from St Albans, a first ride of over 180 miles during which it went very well. He used it for another two weekends during which the magneto caused a few problems but allowed him to do over 1000 miles. The magneto was swapped for a proven one only a few days before we were due to leave but it cured all the faults. 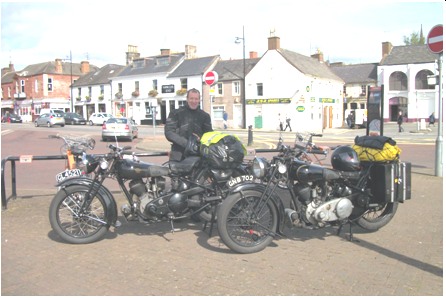 The two Broughs were packed on the Wednesday night and we left in sunshine early next morning, Florence tucked in behind Spud as we rode along the A65 to pick up the A6 to ride north over Shap and into Scotland.

The rain started after 170 miles but the bikes never noticed, bowling along together, cruising at about 60 mph and going well. We took the ferry over to Hunter’s Quay and rode up past Loch Eck and the Argyll Forest, reaching Inverary to find somewhere to stop for the night after riding nearly 300 miles.

By this time we were used to being a sort of tourist attraction and the Broughs were promptly photographed by a couple from France and a man from Cambodia. We tucked the bikes into a hotel car park, locked and covered them before settling into our room and hanging our damp gear up to dry.

An overcast morning saw us riding north towards Oban on roads that were ideal for the old bikes. They handle well and only the worst hills slow them down. It was an excellent ride and we made good time to the Corran Ferry (photographed by Germans here!) where the ferry man remarked ‘I’ve waited for years to have a Brough Superior on the ferry and now two turn up at once!’

We set off on the final 44 miles, swooping and chasing along the twisty single track. The road was freshly gritted which unnerved me more than once but Florence never faltered.

With 397 miles on the clock we reached the rally site, elated by the idea that we had brought two fine pre-war bikes to this most remote of all Scottish rallies.

What can I say of this well run traditional rally? Plenty of our friends were there, much home-made food was eaten and plenty of beer and whisky was drunk. On Saturday we went on a boat trip to the island of Staffa, whose unique rock formations were an inspiration to Mendelssohn and are a magnet for many tourists during the year. Some of the rallymen took the ferry to sample the delights of Tobermory, the town on nearby Mull with its distillery, shops, friendly pubs and fish and chip kiosk on the quay.

We left early on the Sunday morning, back down the narrow road which now had extra obstacles which a herd of cattle had left us! No problem there and as we neared the ferry a group of cars headed towards us. ‘Ah!’ thought Ted, ‘If we speed up we can catch the ferry that has just come in’ so we dashed along a bit faster and made it with seconds to spare, stuffing the bikes on to the last bit of deck. 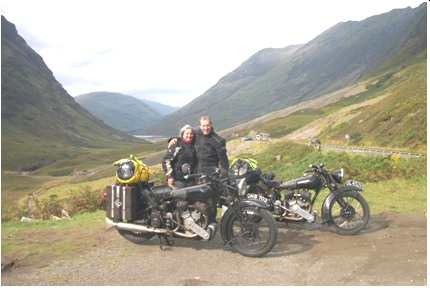 We rode along through Glencoe, stopping to take photos (and allowing a group of Dutchmen to do the same!) then going across desolate Rannoch Moor, gradually making our way south to Stirling  and skipping on to the motorway to pass Glasgow. We got on to the old A74, now the B7078, quite deserted and ideal for the old bikes. Stopping at Moffat for the night we met up with friends for a meal and carried on down the old road in the morning making good time for the last 160 miles and reaching home early afternoon after 772 miles total.

The bikes had done all we asked them to and by choosing to take the old roads where possible we had had a less stressfull ride while not cutting our speed down much at all. The Broughs are perfectly viable transport, comfortable (unless you get caught by an unforeseen pothole) and economical, giving about 50 mpg.

Its such a shame ‘Spud’ has to go back now but it wasn’t such a silly idea after all!