Icy Ale Rally Report - No Ice on the ale but plenty on the tents and bikes on the Sunday; stayed dry for almost all the weekend so couldn't complain......

I'd always wanted to go to the Icy Ale rally but had never got round to it. Having just come back from working nonstop in China for a month I was really missing real ale, pub grub and the English spoken word not to mention riding my bike. Jill and I loaded the bikes up and set off just before dinner on the Friday; chilly but dry. Surprisingly the M6 south was pretty clear and although we had the usual 50mph roadworks it wasn’t long before we were off at J16 and nipping along the A500, A50 and finally the A6006 to arrive at a cricket field in a sleepy little village in Leicestershire around half two. A quick glance around the field picked out the unmistakable swagger of young Mr.Skelton coming towards us to direct us to Mayflower Corner. The Vango Arc was up and outfitted just in time before it started ‘spitting with rain’ so it was time to book in and check out what the pavilion had to offer. As it turned out, quite a lot! A 4x slice toaster, microwave, 2x large water boilers, free tea and coffee and a selection of ‘ding’ meals for £2.50 (Cottage pie, Stew and dumplings, pasta etc.) they were also doing beans on toast for £1.50 which wasn’t bad if you didn’t want to bother cooking. 4 long tables and a gas heater made it all quite a cozy place to escape the dropping temperature outside. Woman’s toilets were attached on the side and a couple of porta loos out on the field were for the boys. Book filled in, rally patch and refuse bag collected, it was time to head across the field, down the slope illuminated with pretty flashing lights and into the pub.

The pub is a lot bigger than it looks. 2x bars, a small conservatory, medium sized dining area and a plastic tent attached to the side with several real ales on rack provided enough space for the 150 or so rallyist’s without it feeling overcrowded. 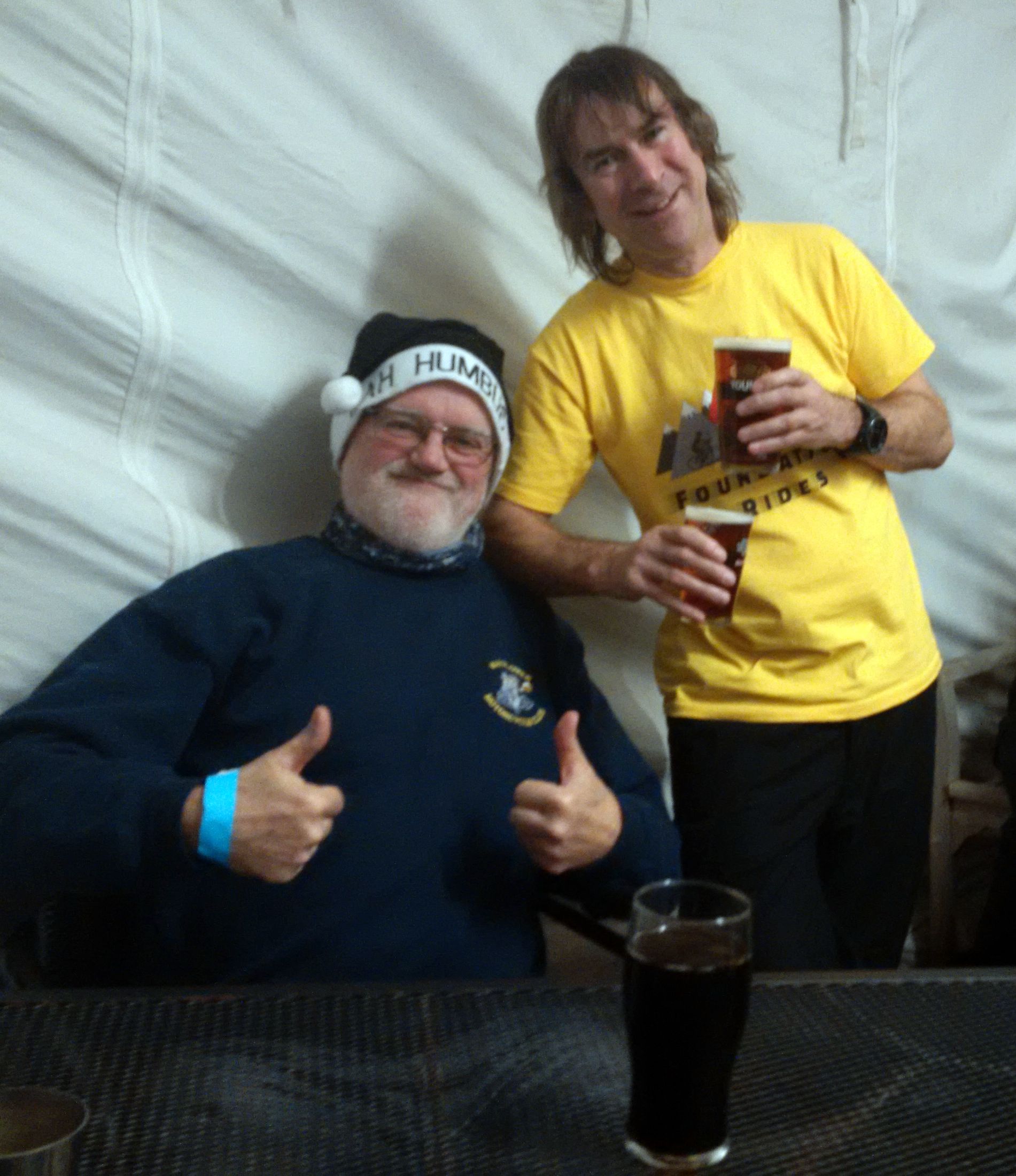 Food wasn’t bad, arrived quickly thanks to an army of child labour; offspring of  the landlord and his family, and was reasonably priced. Free tea and coffee and  a large box of assorted biscuits were strategically placed on the window sill  opposite the kitchen in the adjoining corridor between the bar area and the  restaurant/beer tent; either to make it easier to refill or to keep an eye on the  biscuits gobblers. (I saw you Mr.Mayflower…… with the glasses…..I shall say  no more) The only small complaint was that the plastic cutlery supplied was so  flimsy it fell apart if you shouted at it, but a polite complaint soon brought one of  the little minions scurrying over with metal replacements.  The stout on rack in  the beer tent proved very popular, the other beers were not bad and everybody  had a good old time of it although Mr.Hignett was not impressed with Jill’s  homemade mead when we finally managed to persuade him to try some. 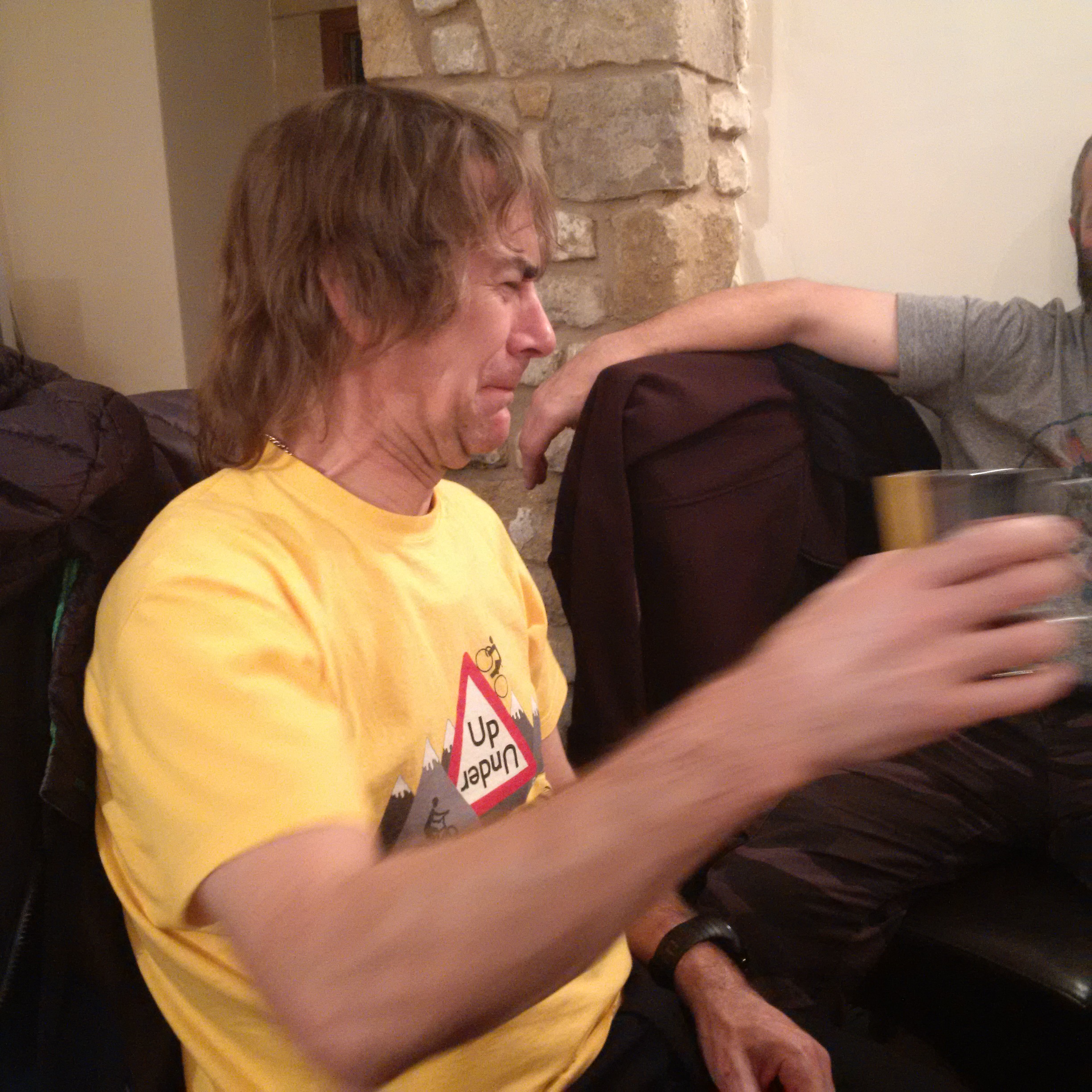 Some lager boys just can’t be educated. We  rolled out the pub early; about 1130, as I wasn’t  quite back up to full drinking strength so soon  after China and picked our way back across the field to the tent, guided by Mr.Throssells green LED beacon hanging from his Force 10. A cold, cloudy night turned into a cold, cloudy day but dry and for that we were thankful. The pavilion was popular, as you could imagine, but Jill and I found a bit of table to squeeze onto, to tuck into 1st breakfast of porridge pots (with dried fruit and nuts), tea and coffee. Turned out it was actually about 10 o’clock, both of us had overslept, and neither of us had heard Alan Meredith’s alarm go off in the night even though his bike was parked directly behind our tent!

Back at the tent and contemplating what to cook for 2nd breakfast, the assembled Mayflowers were getting itchy feet.

Richard and Robert had already departed for the infamous ‘ghost bus’ (as we later came to call it) which takes you to isolated areas where there is nothing to do or see, 3 times a day and, according to the landlord, might come back for you, if your lucky. The others were contemplating putting their lives in the hands of ‘Bear’ Hignett who, armed with another google maps print off, was claiming he had found an ‘interesting walk’ to the pub in the next village and, what could possibly go wrong? Pondering over the disastrous outcome of the Captain Cook rally expedition the previous year, the group opted for the safer bet of walking the mile and a half along the road to the next pub, rather than be eaten by wolves in the surrounding country side. So, 2nd breakfast was skipped and off to the pub we went.

The 'next pub' is now more of a trendy eating place which only has a bar to allow people to gather while they are waiting to be seated. The 2 very well spoken young ladies behind the bar did look a little surprised to see the arriving horde so early in the day but a few polite please and thankyou’s go a long way to stop visitors getting burned at the stake, and between us all, we did spend a fair bit of coin on food and drink as we whiled away the afternoon sat next to the log fire. But it wasn’t long before ‘Bear’ Hignett was itching for the great outdoors again. Leaving Mr.Green and Mr.Meredith to fall asleep in the big leather arm chairs we said our goodbyes, trekked even further on to a even smaller village, another mile down the road, to find pub No.2 that only opens at 3pm.

The Blue Dog, if it wasn’t for the pub sign, could easily be mistaken for a  typical village house of the area. It has a  small ‘snug’ big enough for about 20 people at a  push and reasonable sized bar/pool table area with a decent sized fire in it. Trade  was  quiet, and we were the only ones from the rally to have ventured so far but the landlady  was friendly enough, offering ‘tasters’  of the beer and ciders on draught and amazed we  were under canvas at this time of year. The food menu doesn’t have much more  than  burgers and sides, but if it opened at 12, or could be persuaded to open at 12 next year,  it would be a better place to spend a  long Saturday afternoon round the pool table and  dart board. Apparently, its unusual name reflects the tradition of local farm  workers on the local estate being paid partly in blue tokens. The 300-year-old building was once a war hospital and is  supposed to have a ghost - a drummer boy called Albert.  The ghost didn’t appear but ‘Bear’ Hignett did win a game of pool, which just goes to show that sometimes,supernatural things do  happen. 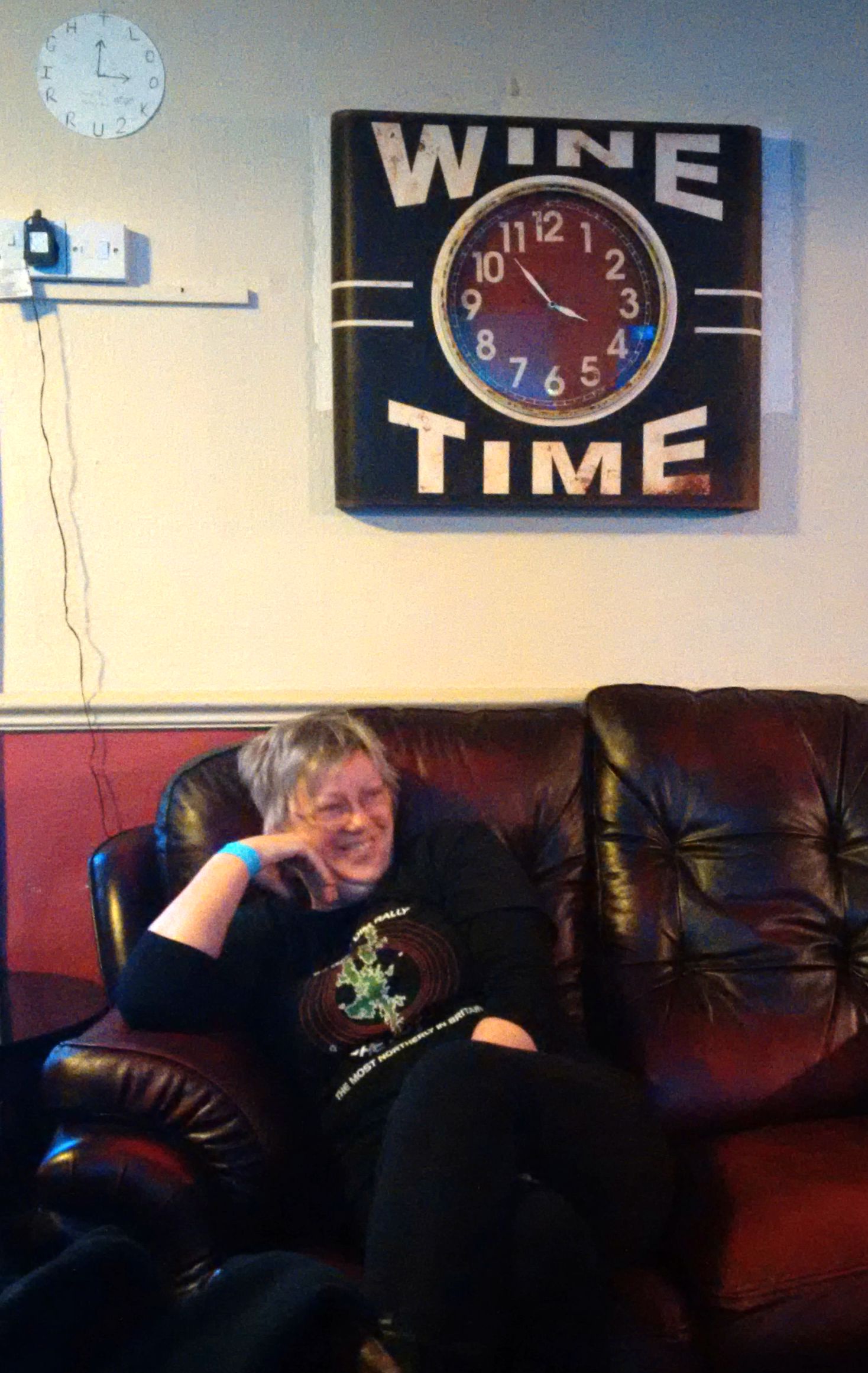 Suitably refreshed and ‘all pooled out’ we set off back a few hours later armed with head torches and jackets nipped up tight in the dropping temperature and inky blackness. The ‘ghost bus’ passed us twice, in opposite directions, empty sept for the driver….well we think it was the driver, you couldn’t really tell. Not wanting to die of exposure we had to call back into the 1st pub for one last ale and, if needed, collect the sleeping old dodders from around the fire. As it was they had managed to drag themselves away before the cover of darkness and we later found them back at the rally pub, well and truly entrenched in the beer tent which had now become The Mayflower Hive.

The place was now in full swing. Rock music played in the 2 bars at the front and some soppy trendy stuff was piped out of the speakers in the eating area at the back but the conversation and general bravado pretty much drowned it out. Halfway thru the night, tables in the eating area were rearranged, a small dance floor cleared and a rock disco set up in the corner. Surprisingly it wasn’t as loud as we feared and didn’t drown out the conversion in the adjacent Hive. Award time came; a German guy got long distance male, our Heather received long distance female and trophy’s for club turnout and club aggregate mileage were collected by our own Nigel Green and Spider respectively. Heather later took the trophy off Spider saying he couldn’t take it home as he hadn’t actually booked in and passed it to Jill for safe keeping. 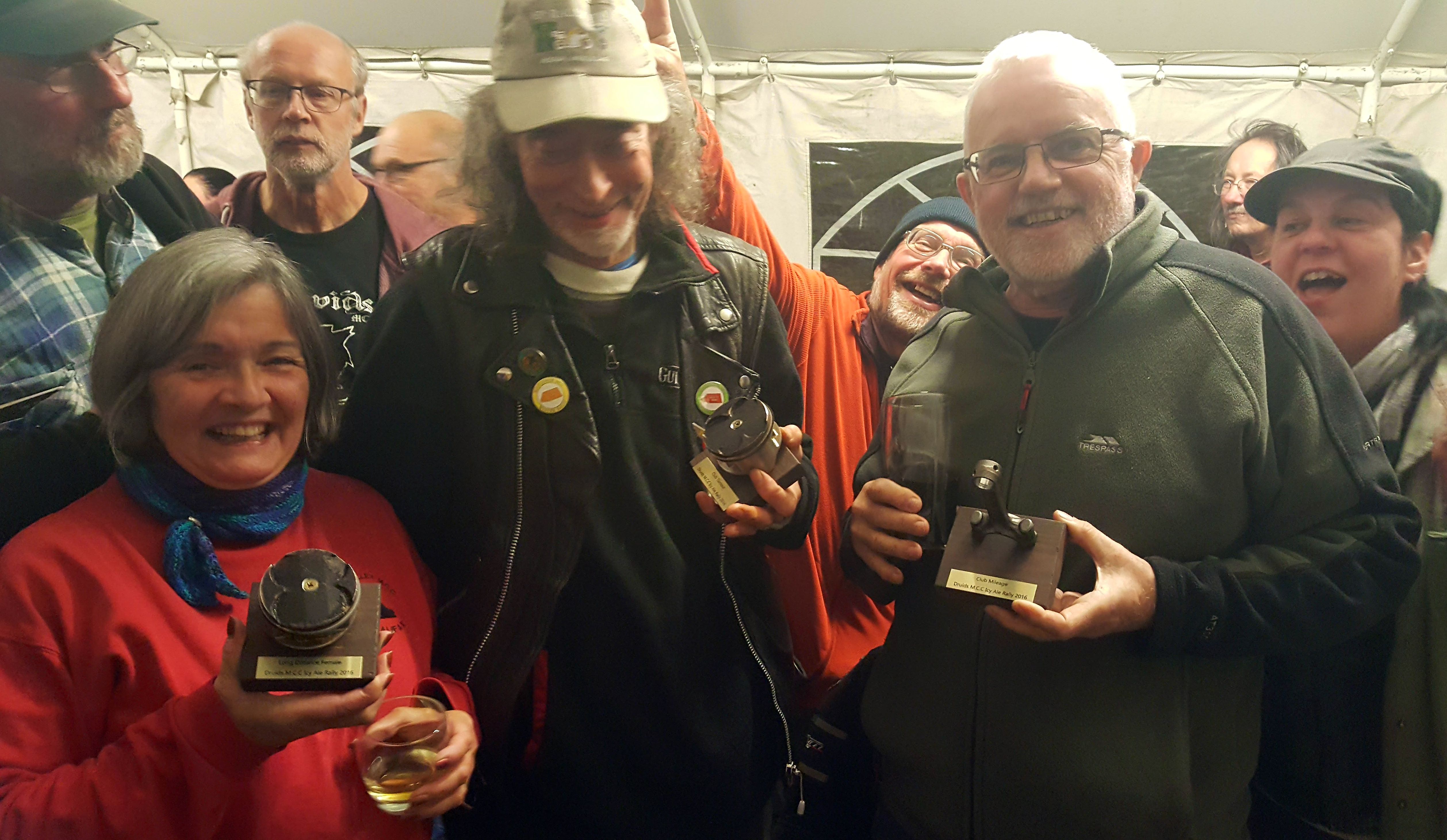 The disco started up again, people bopped about on the dance floor and plenty of ale was consumed in the Hive trying to decide what the little heavy conrod, that made up one of the trophy’s, was actually off. 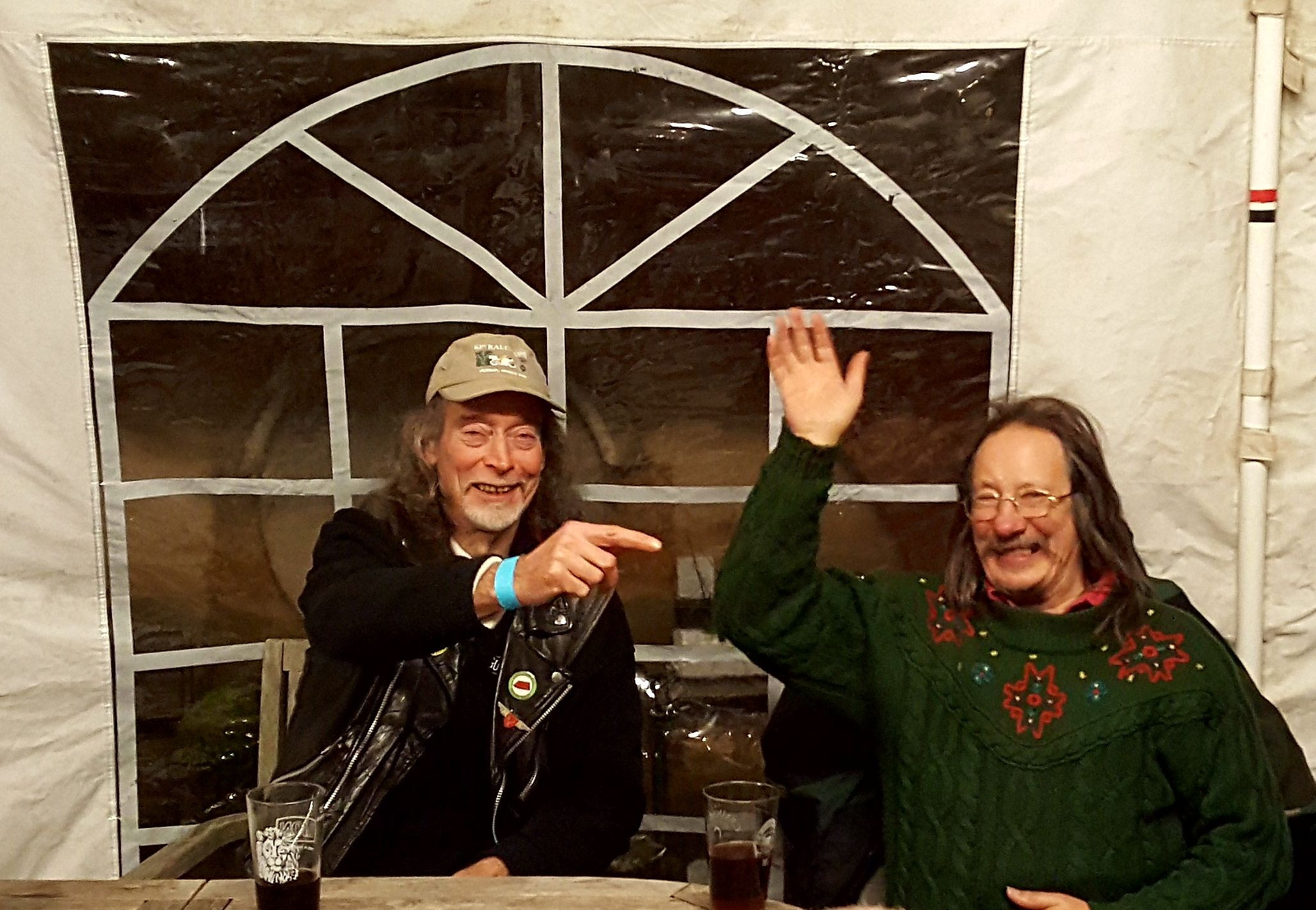 Midnight came and Alans bright green LED guided us, once  again, across the now slightly crunchy  field to our beds. No  bike alarm during the night this time but people did report  hearing strange small  animal screeching/calling/meowing  noises at one point but it was too cold for anybody to be that  bothered to go and investigate.

The morning brought sunshine, which was just as well, as the  tents and bikes had a covering of ice but  not enough to cause  any problems starting bikes or anything. Again only 1st   breakfast was consumed,  this time deciding to get packed and  on the road asap to take advantage of the good weather. The  120  odd miles home passed almost as quickly as it did coming  with only 1 stop to fill up and have a leisurely  coffee along the  way.

Would I do it again? Probably, if enough Mayflowers did it. The 2 local pubs are not all that far away and  given the fact that Richard and Robert did actually return on the ‘ghost bus’ leaves something else to try  next time.Only thing was, they never actually said where they ended up or what they ended up  doing.....they each just had a sort of glazed look in their eyes and went quite when you asked……??