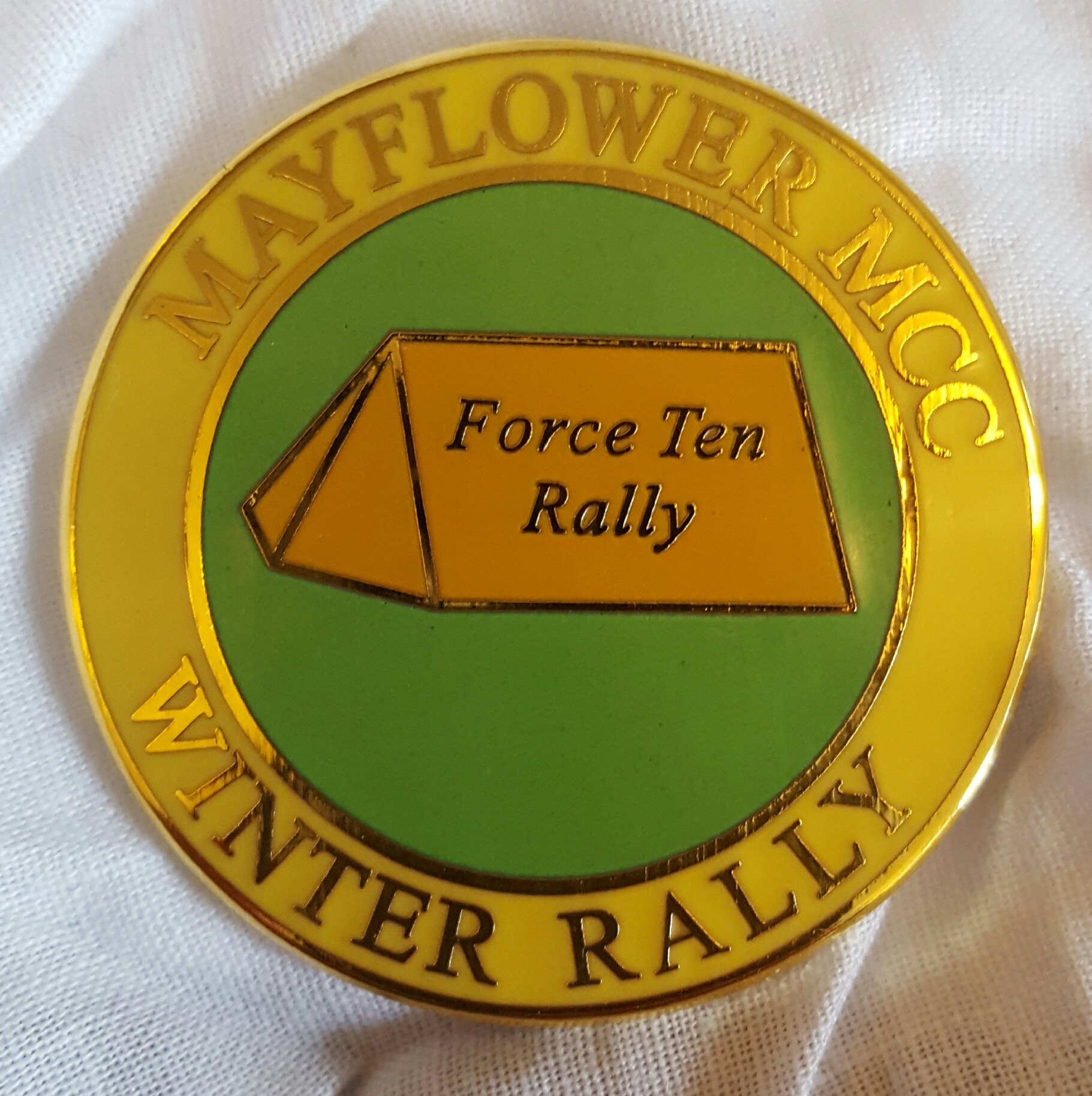 The rally was very good…..the end.

(…this ‘under 5’s’ version of the rally report

was requested by Dick who found my last rally

report too long to read. Tracey had to make him some

warm milk and take him for his afternoon nap before he

could finish it. The ‘adult’ long version is below……)

“He’s Kim’s bitch now, don’t you know? said the Captain. “He’s what?” asked Moz as he surfaced from his pint of Guinness. “He’s co-editor of the website, he’ll make you famous if you’re not careful” …….and so started the conversation between the three of us sat in the pub at 5 o’clock on the Thursday night of the Force 10 - 2017.

Nigel ‘The Captain’ had been the first to arrive around mid-day. He’d only come 12miles from where he’d moored up his narrow boat and had decided to come on the little 125 monkey bike. He was feeling quite ‘chuffed’ with himself as he had managed to strap on as much as he normally carries on the BMW. I arrived about 1.30 after taking the wrong exit, entrance; what ever you want to call it, at the newly finished Coventry underpass/roundabout thingy, closely followed by Moz and ‘Combo Kev’ on Kevs old BMW outfit. Kev simply pitched his canvas ‘circus tent’, deposited Moz with all his gear and then retreated back to Coventry. Maybe he had seen the weather forecast.

It was sunny with a clear blue sky and quite pleasant as we pitched and outfitted the tents down in the corner, commandeering a picnic table to attach the front of my tent and porch to. But when the sun dropped behind the trees it started to get bloody cold. Moz scuttled off to his tent to hibernate till the pub opened at 5 but the Captain and I were made of sterner stuff and set off into the village on the off chance that one of the other six pubs were actually open. If nothing else the walk would keep us warm. ‘Fortune favours the brave’ or so the saying goes and two pubs down the road we were sat in leather armchairs toasting our ‘footsie’s’ in front of a nice fire. Once open, we returned to the rally pub and settled in with Moz by the fire. Evening meal consisted of four bags of ‘Cheddars’ between the three of us as nobody could be bothered to venture out back to the tents, let alone down the road to a pub with a restaurant opening at 7.

The temperature outside continued to drop; the table outside the pub and the road looked to be covered in snow but it was actually a really heavy frost. 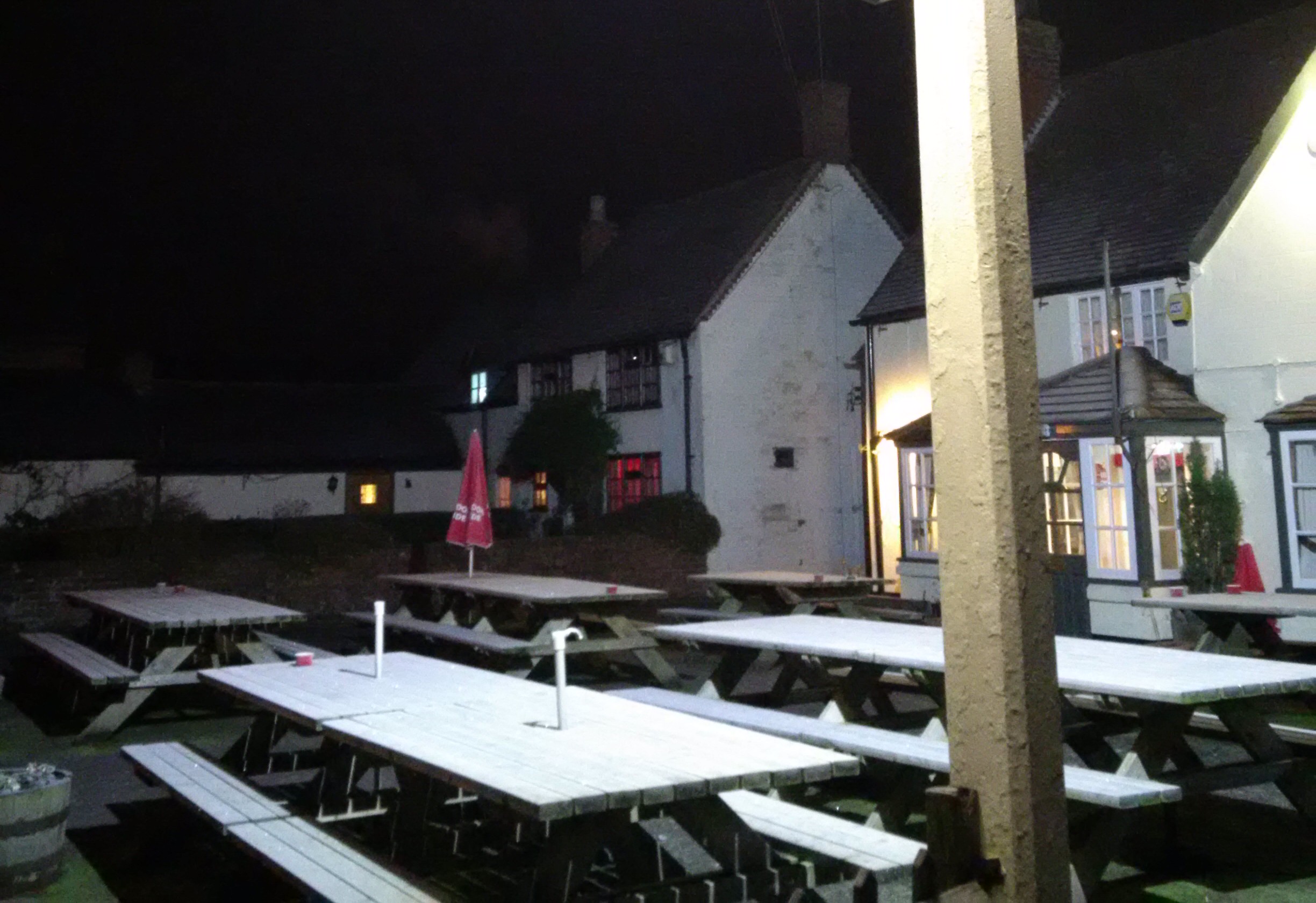 The morning brought a few surprises. Far side of the field another tent and bike had arrived at some time in the night, although none of us had heard anything. ‘Cupcake’ had gone on night shift with his bike fully loaded and had made it to the site just after 5am. He’d pitched as far away from us as possible so as not to wake us and at one point had a fox sit and watch him, almost within touching distance without a care in the world. No idea what the roads must have been  like getting there at that time in the morning.

The other surprise was just how cold it still was. None of the gas stoveswould work  properly and although we were all using the high performance blend gas for low temperatures, it took Nigel 10 mins to boil a mug of water and 30 minutes for my omelette to cook.

By this time the Co Op down the road was open and croissants and warm sausage rolls became 2nd breakfasts. Shortly after, Steve arrived from France having landed on the south coast around 7am, and ‘smugly’ started to unload and outfit his tipi tent - including his meth’s tent heater!

The next couple of hours were spent standing around under a grey chilly sky watching people arrive in dribs and dabs while waiting for the pub to open at midday. We shared the pub in the afternoon with a local funeral party which was double booked. I think most of them knew we were there but we did have a few surprised faces from time to time. Never the less everybody showed respect and behaved themselves, most wandereing off into the village to give them some space. The big round table in the corner next to the radiator was too much of a draw for us tho, so we stayed put till late afternoon trying to think of more horror stories to torment young ‘Bear’ Hignett about stag do’s and what we would do to him as he had recently popped the question to his beloved (…who actually said ‘yes’ !) Eventually it was time to zip up and wander down to the next pub for something to eat.

Our assembled little group ended up splitting at this point. Some wanted something a bit fancier and ventured further into the village, while others were happy with reasonable prices and decent enough quality (or was it simply that they couldn’t be bothered walking any further?) Never the less a bit more walking they did do, and once suitably nourished, we all centred back into pub no.3 as agreed. This pub (the one the ‘Captain’ and I had taken refuge in the night before) turned out to have a pool table and jukebox hidden away at the back, and so, while waiting for the ‘posh diners’ to arrive, I enjoyed being suitably ‘thrashed’ by my wife while listening to Creedence Clearwater Revival - at pool that is! Totally humiliated, I returned to the main room to drown my sorrows in cider, but it wasn’t long before somebody else took the limelight.

The scene was horrific...! Blood everywhere; screaming, wailing, simpering and sobbing……’Bear’ Hignett had been given a brand new Swiss Army knife for Xmas by his beloved Jane. Believing he was ready for his first pen knife, Jane was confident his motto of ‘… what could possibly go wrong’ would not / could not apply this time. Oh you of little faith! In his eagerness to show off his new toy, he'd opened out all the blades and gizmos and then, trying to get to the scissors, promptly sliced his thumb. The old hands in such situations like the ‘Captain’ et al simply mumbled suggestions like ‘..it’ll be alright, spit on it lad, grow up’ while I offered to cauterize it with something glowing and evil from the fire. Jill stepped into her medical mode, applied a plaster for him and asked if he needed a sugarlump or if he wanted anything else doing while she was in the mood; like whipping out his appendix. Alcohol eased the shock and pain. The rest of the night, at both that pub and the rally pub, passed without incident.

Saturday morning brought another grey, cold day with indications of rain. While some people scuttled between porta-loos and the pub - for breakfast or the free tea and coffee, others were fending for themselves and reaching for frying pans and stoves; the temperature now being noticeably warmer and the gas problems from the previous day forgotten. Around 11’ish you could see signs of advance parties setting off for pubs, and our little group mustered around mid-day. Our target was the 2nd pub along the canal. The 3rd one (farthest out from the village and a good starting point to then crawl back from) can be a bit dodgy to reach with the state of the foot paths this time of year so we gave it a miss, and beside, the 2nd one has something special worth seeing anyway.

From October onwards they start putting up the Christmas decorations in this particular pub along the canal and, by the time the festival day arrives, the entire pub is one way over the top grotto! The beers good (cheap’ish too) and the food is good quality and filling. 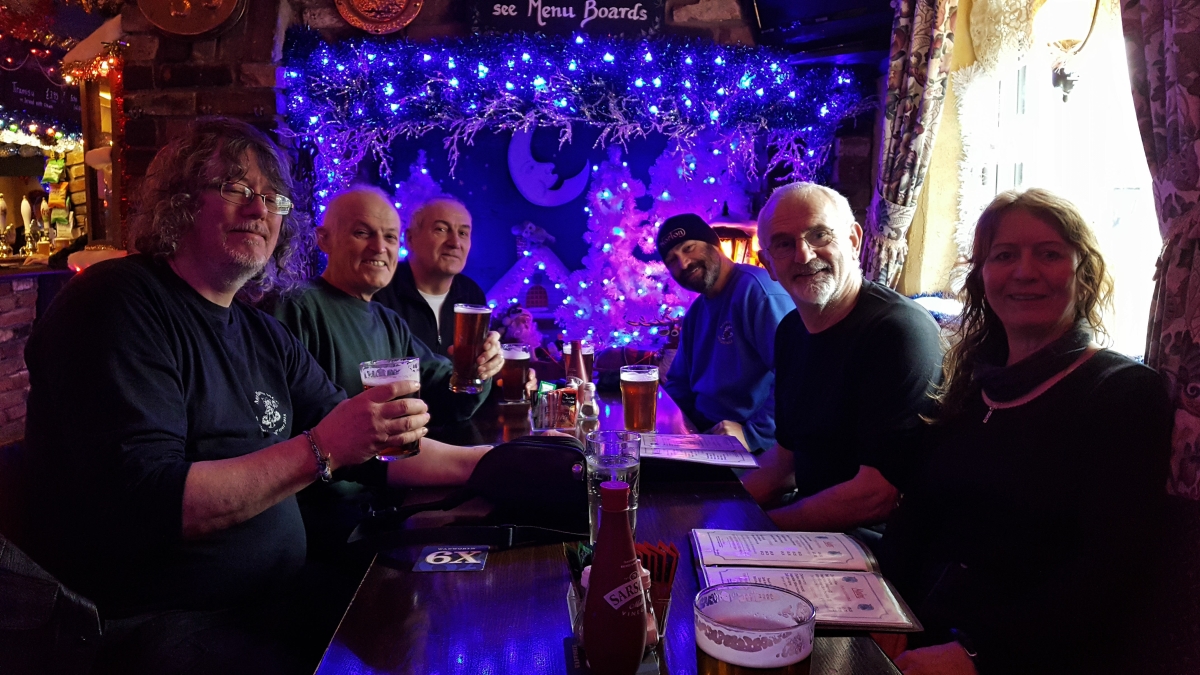 You could quite easily spend the whole afternoon ‘squirrelled’ away in there but we were using this as our starting point so proceeded back thru the village and visited the other 3 pubs. 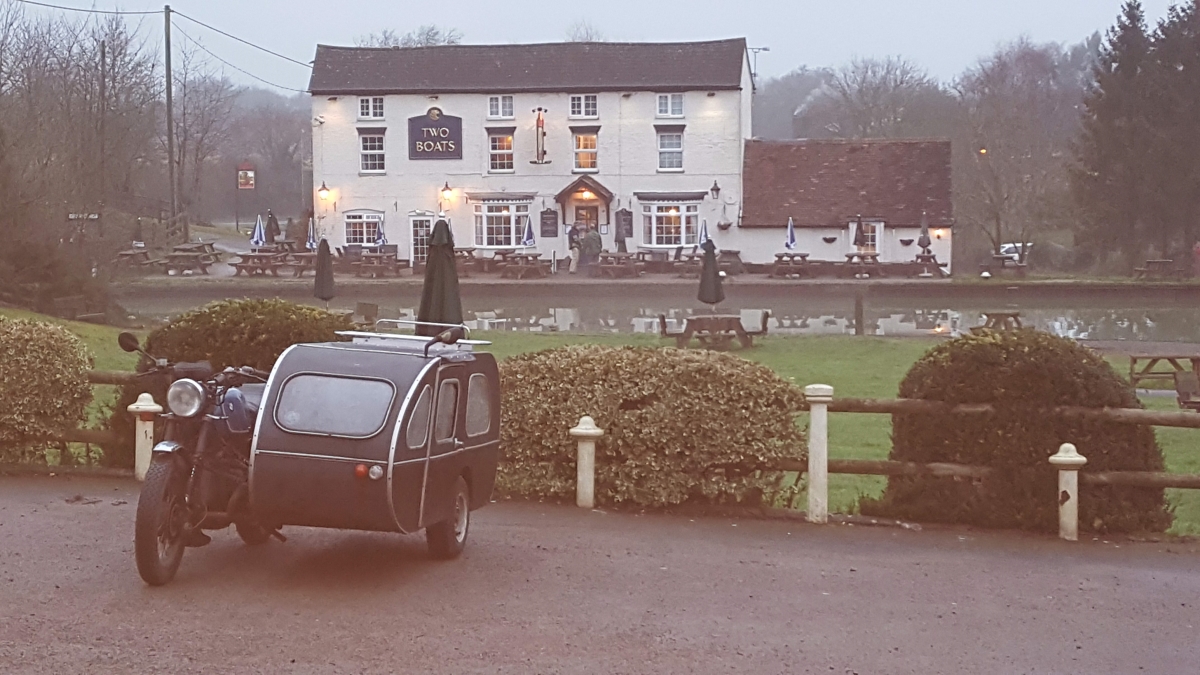 At each ‘port of call’ we found various rallyist and fellow club members - either nestled inside in the warm, or braving it outside in the damp and misty surroundings. Eventually, under the cover of darkness, we arrived back at the pub with the pool table. Whilst deep in conversation there (with Otto, Brian and ‘Otto’s and Brian’s mate’ (sorry), who I had met at the Simmer Dim rally in the Shetlands the year before), I was accosted for raffle tickets by Little Miss Caroline. She had gone beyond the call of duty and come up from the rally pub visiting all the pubs in the village looking for people to sell tickets too. Fair play to her. 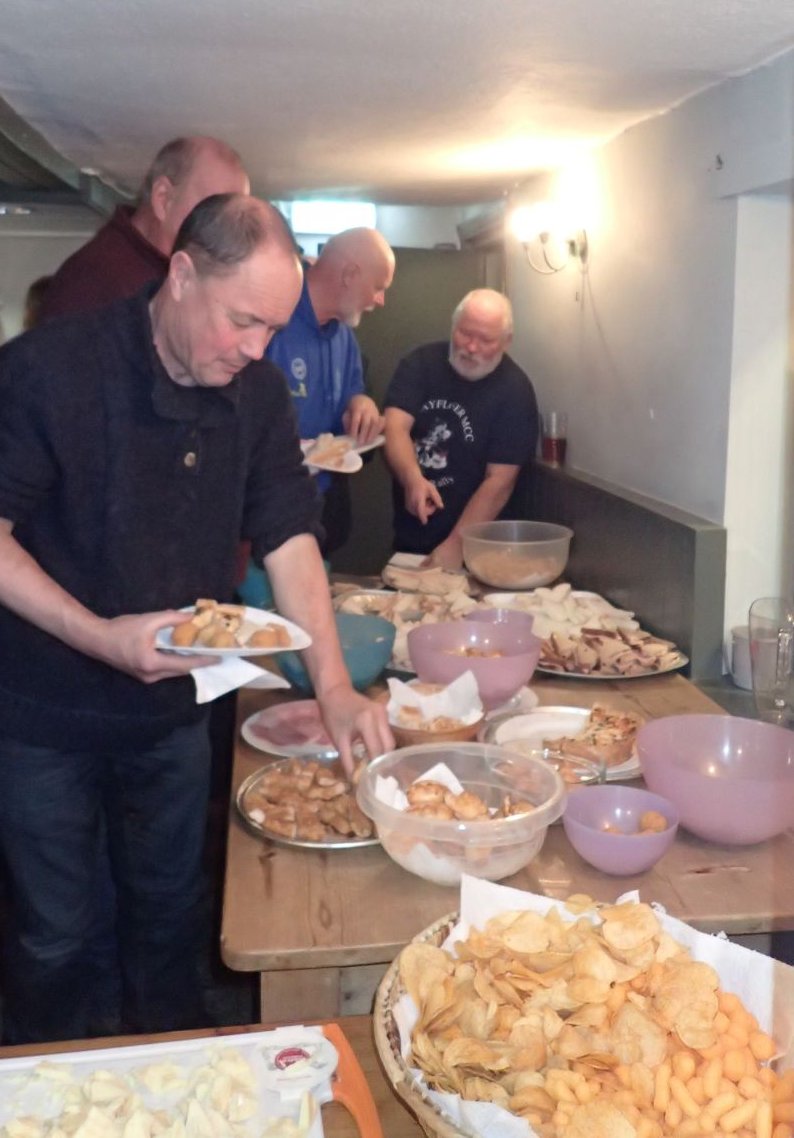 As 8pm approached pints were quickly downed and jackets zipped up. A free buffet is always provided back at the rally pub on a Saturday night for all attendees and is always a good spread, thanks to Miss Paula who caters for both the cavemen amongst us and the grass eaters. Awards and trophies were then distributed and Swanny received Tale of Woe. His Force 10 tent had fallen off the back of his bike whilst coming down the motorway and been dragged behind him. Then followed the raffle. Uncle Rob won more than his fair share of prizes, the upshot being our table ended up swimming in sweets and chocolates supplemented by homemade Xmas tiffin Jill had brought. Suitably ‘sugared’ up, people’s coordination seemed to go out of the window and the table was soon also swimming in beer, the Captain winning a wet crotch. At this point it was time to call it a night and Jill and I retired to our tent leaving them to it.

Sunday morning brought sunshine! The temperature was on the up, everybody seemed to have had a decent night’s sleep and spirits were high. Nobody seemed to be in any great rush to get packed up; the pub was doing breakfast again and people even found time to do a bit of clandestine trading in rare and exotic lego bricks of all things (don’t ask!) Mother nature always has one or two last tricks up her sleeve though, and once we were on the M6 heading North the heavens opened and we settled into a steady ‘slog’ home thru the traffic and road works. Then again, it wouldn’t be the M6 and the North if it was pissing it down. Till next year.