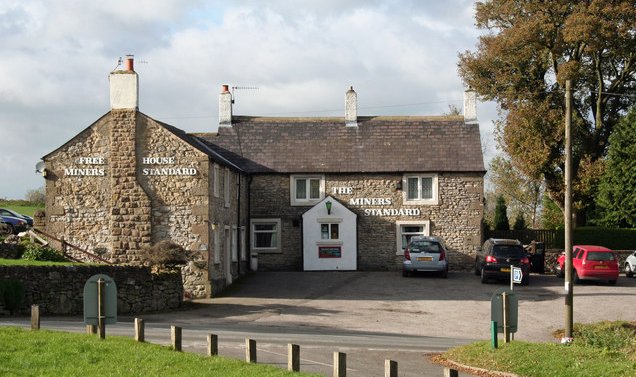 I'd been itching to get out camping again for the last couple of weeks. I'd been down to the AGM but only on the Saturday for the meeting and had to leave straight after as I had important 'stuff' at home. So, when Friday came around and it was time to set off for the Miners Standard in Winster, Derbyshire , I was chomping at the bit to get going. The plan was to nip down from St.Helens to Haydock Island on the M6, tank up and then a short stretch of M6 south would get us to Sandbatch. From there it would then be 'A' roads thru Congleton, up over the moors and then the outskirts of Buxton to the Miners Standard at Winston. So much for plans. 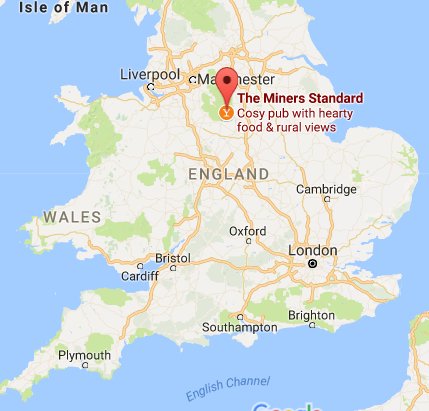 We could see that the M6 south was practically at a standstill as we got into the petrol station, then, coming out and round to the slip road we saw the police cars blocking the road and was forced to detour down thru Newton and towards Warrington. This was going to be a bloody nightmare going all the way thru Warrington on A roads to get back onto the M6 at this time of day (even on a bike) but as luck would have it the next junction was actually open so panic over.

We couldn’t have asked for better weather; crisp, bright, blue sky with a scattering of clouds. The ride over the moors was great. Arrived at Winster just after dinner time. Didn’t really know where the pub actually was, so we decided to have a ride round and thru the village looking for clues. Bit of a surprise to find ourselves going down a very steep street with a car coming towards us with a big smiling face peering at us thru the windscreen; 'was that John?” shouts Jill over the intercom. Yep, close encounter with Mr 'Around the world in 80 days' Fitney.

When we did find the pub, with the big car park and camping field round the back, we were not

alone. Several members had ventured down on the Thursday and a few 'early birds' had beat us to it. No worries, the field was plenty big enough and untouched by car or bike; which was just as well as it was extremely soft and had a fair slope on it. Tent up and outfitted, we spent a lot of the afternoon wandering, chatting, and drinking the odd can of cider that had mysteriously jumped into Jill's top box somewhere along the route. 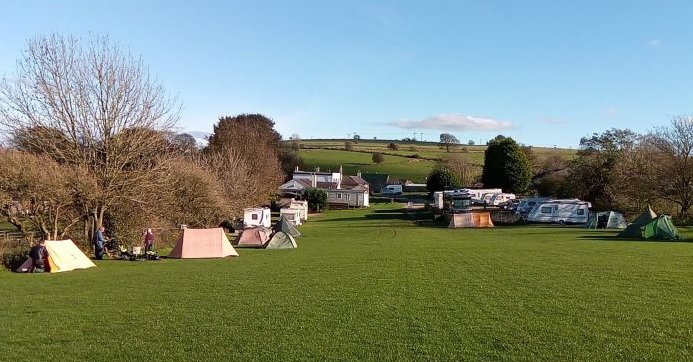 Friday night followed a tried and tested routine as far as Mayflowers go. Check out the camp-site toilet and shower facilities, explore the pub and sample the beers on offer; repeatedly. Turns out the landlord had a nice custom...you order a pint, he pulls the pint and sets it down in front of you. You take a 'mouthful' and he then takes it back off you and fills it back up! Well nobody had told me. I had to explain this was all new to me and I wasn’t taking the piss (or expecting it to be filled up again) after he'd watched me sink half of it in the 1st go and plonk it back on the bar. Nevertheless, he was kind enough to fill it back up. I was a bit more conservative after that with 1st mouthfuls. Can't remember what time we rolled out the pub; slept well, not too windy, light rain and mild.

Sunny Saturday morning came and I was up early. I had to get 1st breakfast going, get Jill up, washed and dressed for school and sent off with freshly sharpened pencils and a notebook to her 1st committee meeting as the new camping coordinator. Paula had set the meeting for 10am sharp in the pool room of the pub and nobody wanted to be late. But there is always one. Much to the cruel enjoyment of several members stood around drinking coffee in the crisp morning sunshine, a certain ex-chairman didn’t seem to see the funny side of it as he came running from his tent, well past 10 and scuttled across the field, almost going 'arse over tit' in the soft bits! Shame on you all. After a while I joined the other 'abandoned' better halves of the committee members in the bar; quietly sitting by the door, waiting for school to turn out, or the bar to start serving; which ever came 1st. 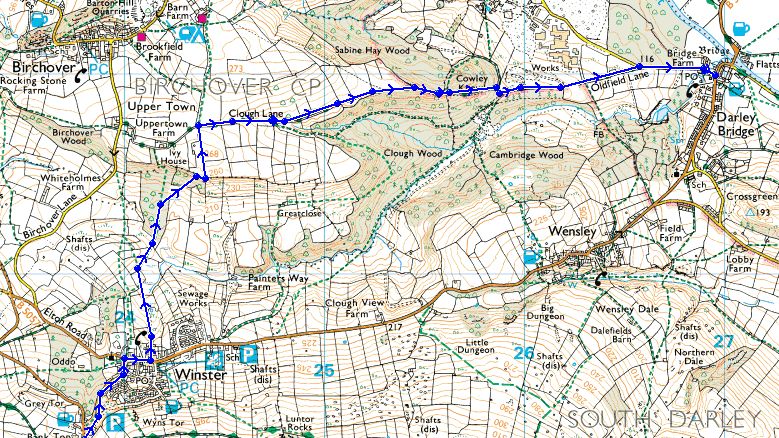 watch steam trains or heading over the hills in search of other pubs. The 'expedition' force was this time lead by Alan 'Field Marshall' Meredith with his PA....Miss Jane West, along with Paul 'tinky winky' Hignett and Ian Dunmore. Somewhere along the route, Mr.Hunter was involved and a pair of Wellington boots was mentioned but it was all a bit sketchy as to what was going on. Anyhow, apparently the pub in the neighbouring village was ok, good food and only a short bus ride back. ............

........not surprising looking at the elevation map of the route they more or less took.!

Finally the committee meeting was over. By this time Jill was famished, so it was back to the tent to rustle up second breakfast, after which it was siesta time for her. Half the day had gone and the weather had changed. Under a dark and over cast sky I wandered down to the pub. The rest of the day was to be spent sat around chatting by the fire while the wind and rain picked up outside. 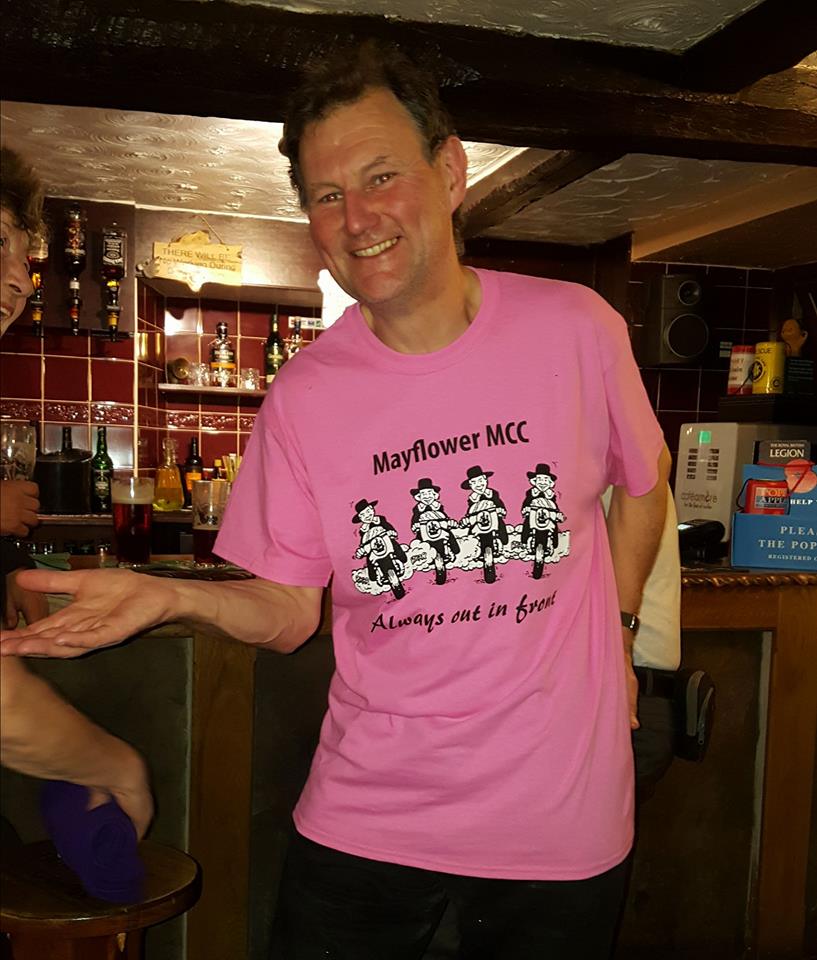 Suddenly, we were bombarded by boobs and pinkness!

Paula had had some 'woman’s shaped pink tee shirts made as part of this years regalia with 'always out in front' on them.

The gathered female members descended on her like a rabid pack, and before you knew it, old tops were off and new ones on!

......much later on, Ying, either drunk or touched by his inner feminine side actually bought one of the only1 or 2 'male' size pink tee shirts Paula had had made.

Saturday night. The pub was pretty much packed. The kitchen staff did a great job of feeding everybody and the beer kept flowing while outside, the wind and rain kept blowing. A pool competition sprang up from nowhere involving myself, Jill, Wilf, 'tinky winky' Hignett and 'the Captain' Nigel Green. It soon became apparent that the so called 'cataract' operation that Nigel had recently undergone was actually a ruse for him having a bionic eye fitted as he won 3 games on the trot to become 'El Supremo Pool'li'o ' 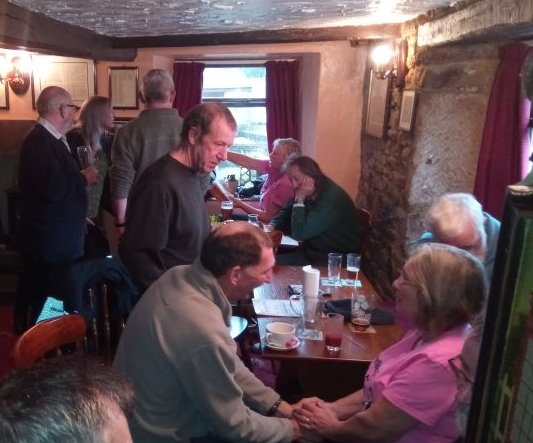 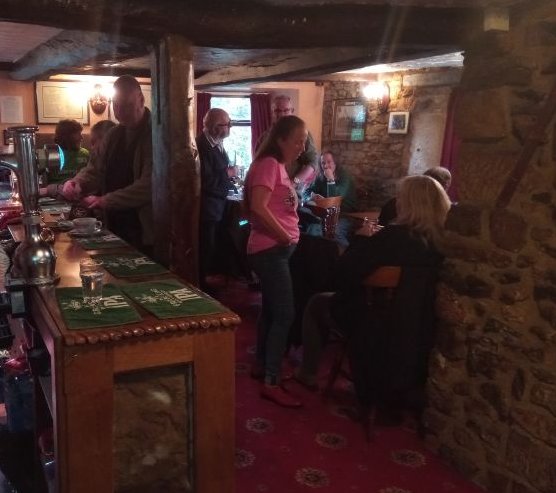 We had aimed to leave the pub about 10'ish but this extended into 11'ish due to something to do with 3 gins and a pickled egg, either way when we did leave the weather had turned nasty. Scott of the Antarctic came to mind as we hunkered down in the tent with the wind battering the door at the front but tucked up my 3 season bag I was soon well away, oblivious to it all. Poor old Jill wasn't as lucky. Twice in the night, while I slept, she had to get out in her 'jim jams' and peg the door and front down with extra pegs as the wind was that strong it was just ripping them out. !! 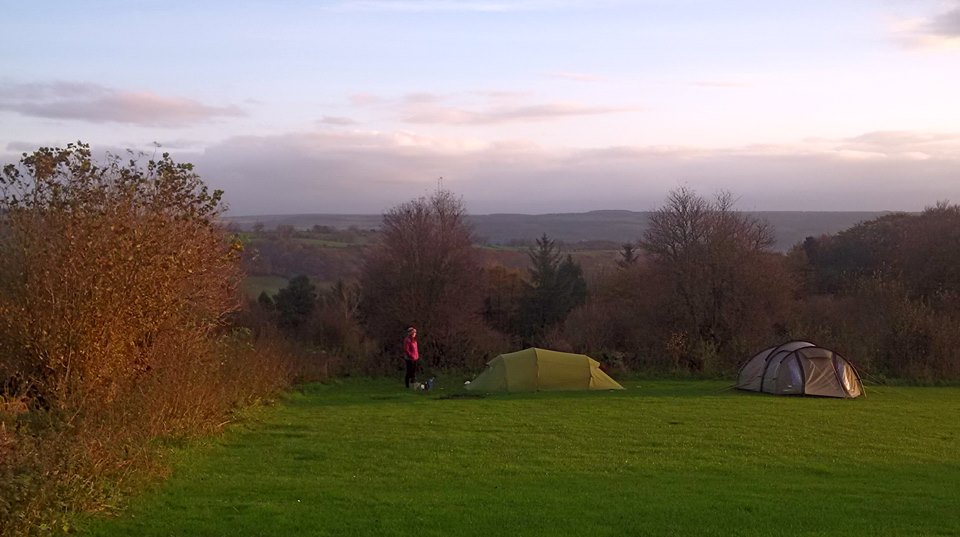 Some time just before daybreak somebody 'upstairs' must have found the wind switch because it simply stopped and, not long after, we were treated to a glorious sunny morning. 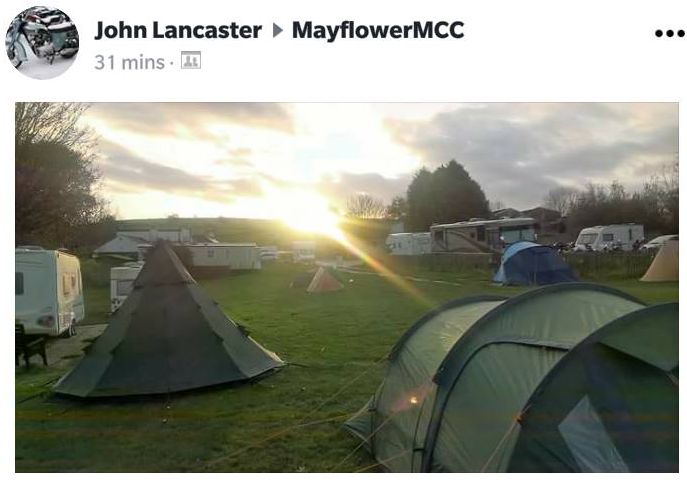 Breakfast and packing up was a pleasure and, yet again, we had sunshine and blue sky as we rode over the moors home.